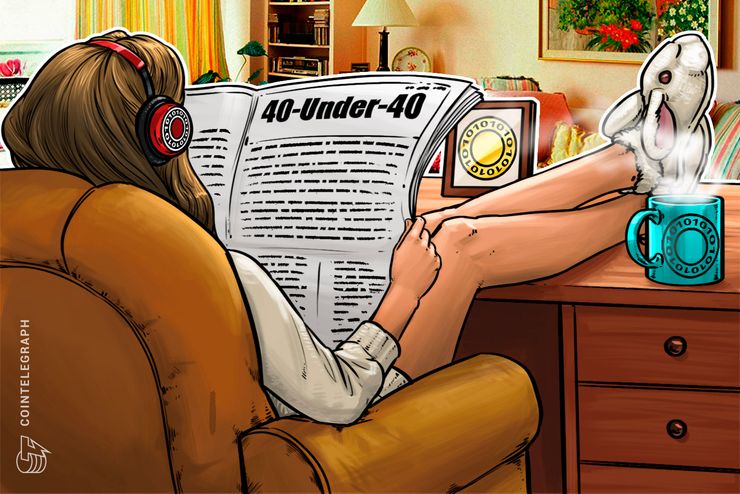 For the first time, Fortune has created a crypto-focused version of its prestigious “40 under 40” honor roll for the most impressive young disruptors in the finance and technology industry, published July 23.

Dubbed “The Ledger 40 under 40,” the list is dedicated to innovators at the helm of the “financial revolution” ushered in by cryptocurrencies, blockchain, and other distributed ledger technologies.

Last week, five crypto industry representatives had already clinched four spots on Fortune’s existing “40 under 40” — all of whom reappear in the inaugural Ledger list.

These include the CEO of major U.S. crypto exchange and wallet service Coinbase, Brian Armstrong, 34, who is ranked first by the Ledger for “catapulting” crypto into the mainstream. “Skinny visionary” Ethereum (ETH) co-founder Vitalik Buterin, 24, has been thrice-celebrated on Fortune’s established list and now seals the second spot on the Ledger list.

In third place is Jihan Wu, 32, the co-founder of Beijing-based mining hardware titan Bitmain — reportedly now valued at $12 billion after a recent round of funding. Fortune notes Wu’s support for the “controversial” Bitcoin (BTC) fork, Bitcoin Cash (BCH), as well as his interest in stablecoins and aspiration to develop artificial intelligence (AI) mining chips.

The list includes figures who have decamped from the traditional financial sector to become crypto industry front runners, alongside those who aim to lead the “revolution from within.”

Amber Baldet, 35, former blockchain program lead at JPMorgan Chase, is ranked eleventh for co-founding blockchain startup Clovyr, her former position as lead developer of Quorum, and her recent appointment to the board of the Zcash Foundation — the nonprofit that governs anonymity-oriented altcoin Zcash (ZEC).

Prior to this week’s full-fledged crypto incarnation, Cointelegraph has followed the burgeoning representation of industry pioneers in Fortune’s 2017 and 2018 established rankings.